The Girl You Thought I Was 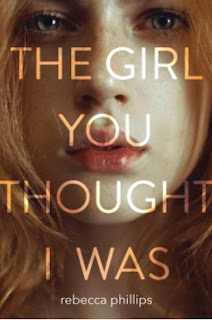 The Girl You Thought I Was by Rebecca Phillips

Goodreads Summary:
No one looking at Morgan Kemper would think she had a secret-at least not one that she's deeply ashamed of. To everyone she meets, she comes across as sweet, pretty, and put together. But Morgan knows that looks can be deceiving. For over a year, she's shoplifted countless pieces of clothing and makeup. Each time she tells herself it will be the last, and each time it never is.

But when she's caught and sentenced to thirty hours of community service, the image Morgan has carefully constructed starts to crumble. She's determined to complete her punishment without her friends discovering the truth about her sticky fingers, but that's easier said than done...Especially once she meets Eli, the charming, handsome nephew of the owner of the charity shop where Morgan is volunteering. Soon, Morgan is faced with an impossible decision: continue to conceal the truth or admit that she's lied to everyone in her life, including the boy she's falling for.

My Review:
This book was your typical young adult romance, with a shoplifting twist thrown in. The first half of the book was when we really got to know the main characters. I found myself rooting for them throughout the whole story. In the second half of the book, that is when the real conflicts began. Sometimes books can frustrate me by how drawn out the conflict(s) are, but this book didn’t feel that way. It was just the right amount of timing to add some grit to the book to keep the reader interested, but not long enough that the reader gives up on it. I loved the way everything all came together in the end. It was so sweet, and the perfect ending.

It was interesting to me when Morgan realized why she had been shoplifting. I hadn’t thought about it in that way, so it was very enlightening (not that it makes shoplifting okay). I loved how well we got to know each character. There were several main characters in this book, but I never felt overwhelmed by it. This was a really easy, fun read, and I would definitely recommend it!

4.5 stars
I received this book for free in return for an honest review.
Posted by Morgan at 7:32 AM No comments: