All In Book Blitz + Giveaway 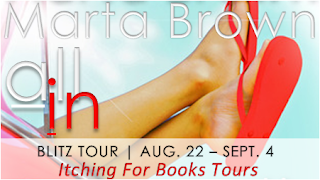 Synopsis via Goodreads:
On the picturesque island of Martha's Vineyard, there are two kinds of residents. Locals and Stays.

Local boy, Lane McCarthy, plans on spending his summer working at the country club to save money for college in the fall, while summer stay, Ashley Whitmore, and her elite group of friends are only there to play.

As the summer heat goes up on the island, so does the ante, when both Lane and Ashley must decide what they’re willing to wager in order to follow their dreams… and their hearts.

About the Author
Marta Brown grew up in the Pacific Northwest and was a teenager when Doc Martens, Pearl Jam and flannel were the norm and Dylan loved Kelly forever. (Beverly Hills 90210 shout out)

She still lives just outside Seattle, now with her husband and cat, and loves the rain.

When she’s not writing about cute boys, first kisses and the magic and wonder of being seventeen, she’s watching The CW. And she sleeps in. Late.


Excerpt:
Ashley
When we step outside of the ice cream parlor, Lane reaches over and wraps his hand around mine, making me feel warm all over, despite the cool breeze coming off the ocean.
We walk down the boardwalk hand in hand, our arms swinging between us, and I can’t stop my blush each time I catch Lane staring at me, and then giggle each time he catches me sneaking a glance at him too. Both of us with silly grins on our faces.
As we turn the corner, at the edge of the boardwalk, right in front of us is a perfectly preserved turn of the century carousel.
I gasp at its beauty. How have I never been here before? Although, a community carousel is the last place that my parents would ever think to bring us. A ride on a schooner is more their speed.
The carousel is covered in small bulbous lights that cast a warm glow over the richly colored horses, each with a different face and intricate carvings on their saddles. The sounds of children and parents laughing intertwine with the carnival style music coming from the ride, and I can’t stop myself from hopping up and down on the tips of my toes like a child.
Lane chuckles, gripping my hand tightly, as we watch the ornate horses spin around and around and up and down until he points at a big brass ring when it spins by. “If you can grab the ring the ride’s free. Come on.” He gives me a smile and like a couple of kids we run along the side of the carousel until we both grab hold of the ring and hoist ourselves up and onto the ride, laughing and out of breath.
I move to a stationary white horse wearing a deep red saddle and without saying a word Lane lifts me up, in one swift motion, and sets me down so I’m face to face with him riding sidesaddle. He grips the horse’s gold post with one hand, and I can’t help but admire his sinewy arms, lean and strong.
“You are so beautiful,” he says, looking into my eyes as he brushes his thumb against my cheek with his other hand. His sincerity takes my breath away.
I wrap my arms around his neck drawing him closer until he’s standing between my legs. His soft smile fades into a smolder as he leans forward, causing my breath to hitch with the anticipation of his lips on mine.
I close my eyes as he closes the short distance between us achingly slow. My heart skips a beat when I finally feel the warmth of his lips press against mine. He tastes like ice cream and smells like summertime, and I suddenly wonder if the swirling I feel is from the ride or from his kiss.
He pulls away slightly before wrapping his hand around the base of my neck and pulling me into his lips again, making me certain of one thing.
I’m swirling, and it’s definitely from his kisses.
Posted by Morgan at 1:00 AM