Too Many Cooks + Giveaway 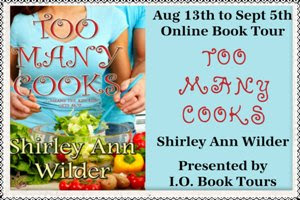 Too Many Cooks by Shirley Ann Wilder

Book Blurb:
Bitter news leads a San Diego widow and widower to true love—and to a scheme to marry off their adult children, a plan that goes deliciously awry.

Gaetano Lorenzo was the sweetest man that the widowed Estelle Bennett had ever met. That morning began terribly, with awful news, but now the owner and head chef of a local San Diego ristorante was offering up Italian delights: red wine, delicious food, walks on the beach, laughter when she’d never thought she’d laugh again…. Estelle felt twenty-five. She and Gaetano had found the recipe for love, and a simple variation might just get their adult children to settle down, too. A scoop of sugar, two ladlefuls of lust, a pinch of deception and a whole 24 oz.-can of danger— Suddenly, ingredients were coming from everywhere! But kitchens are crazy places, and variety is the spice of life. And for anything to get cooked, things have to get hot.

My Review:
This is a very cute, fast read. It almost feels rushed, and I felt like I did not get to know enough about the plot in order to really love this book. However, I still thought it was a great, light read. I loved all of the matchmaking schemes. They were so funny! This book also switches points of view a lot, but I liked getting to hear the story from all of the characters different points of view.

I received this book for free in return for an honest review.

About the Author:
From the time she could hold a pencil, Shirley Ann Wilder wrote stories. Being the youngest of six children, she was overlooked many times but found wonder and magic in reading books. As a youngster she was especially fond of horse books and read every one of Walter Farley’s Black Stallion books.

That passion for horses carried over into her adult life and with her husband and four children, raised Quarter Horses and German Shepherds. Shirley’s other passion was writing, but it was put on hold until the three sons and one daughter were in high school.

After developing a severe allergy to the equine species and having to give up the major part of horse involvement, Shirley wrote a weekly column for a community newspaper and a monthly column entitled “On the Wilder Side” for the California Horseman’s News in the which she recounted the humorous episodes that happened during the Wilder Family’s horse era. Shirley also published in college literary magazines, but her real quest was to write novels.

After taking numerous writing classes and amassing many unfinished manuscripts, one of her writing instructors suggested she join Romance Writers of America. Taking that advice she also joined the local San Diego RWA chapter has since completed six novels. She served on the Executive Board as Co-President of RWA- San Diego for 2006 and 2007 and held several other chair positions. She credits her fellow writers for the support and encouragement that has kept her writing during recent difficult times.

Shirley Ann was widowed in January of 2008 when her husband died of stage four colon cancer after battling it bravely for three years and four months. Three of her grown children live near her in suburbs of San Diego and one son lives in Kentucky. They have blessed her with four granddaughters and one grandson.

Since her husband’s death, Shirley has become an advocate for colonoscopies and is currently working on a non-fiction book about the grieving process and all one encounters when suffering the loss of a mate. “John was my hero and I will miss him forever, but he always encouraged me to keep writing and to stay strong.”

If you cannot use rafflecopter here is a link

Rafflecopter
Posted by Morgan at 1:00 AM