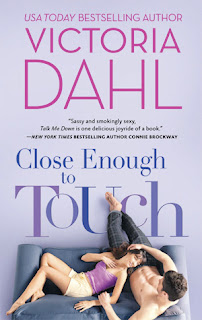 Goodreads summary:
For makeup artist Grace Barrett, Hollywood isn't the land of golden opportunity. It's the land of difficult divas, cheating boyfriends and unemployment. So when her great-aunt offers her a free place to stay in Jackson Hole, Grace thinks she'll spend a little time in the sticks to figure out her life, and then move somewhere exciting to live out her dreams. But it turns out that there are a few more thrills in this small town than Grace was expecting….Cole Rawlins is a rugged Wyoming cowboy born and bred. Yet he can't help but be drawn to the fascinating big-city girl who moves in across from him. He wants to get close enough to Grace to see past her tough facade, but if he does, she might see the real Cole. The one with a Hollywood history gone bad. As they discover a sizzling attraction, it becomes harder for him to keep his demons at bay—and those fires from long ago may burn them both.

They'll need more than scorching-hot passion to make this opposites-attract affair work. But if they can learn to trust one another enough to reveal their secrets, they just might have a chance at forever.

My review:
This is an adult romance book that takes place in Jackson Hole. I really liked this book, and the characters in it. There were parts that were frustrating to me, but overall it was a good book. It seemed to be too long and like it would never end, but it was a cute story.

Grace puts on such a touch exterior that it is hard for her to let anyone in. That's what the majority of the book was about. I enjoyed seeing how Cole broke through that and really got to her. Grace and Cole had such a chemistry together. They couldn't keep their hands off each other. At times, I almost got frustrated with it. There relationship was strictly physical. When they opened up to each other though, you saw that they really cared about each other.

Jenny and Eve made me laugh. They were so sweet and such good friends to Grace. They knew exactly what to say or do when Grace needed it. They barely knew her, but they trusted her.

I received this book for free in return for an honest review.
Posted by Morgan at 3:28 PM