Marvin and the Meanest Girl 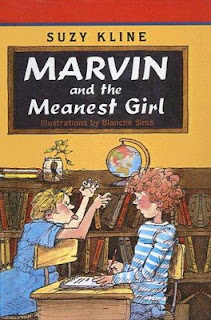 Marvin and the Meanest Girl by Suzy Kline

This is a story about a new girl in the class whose grandmother died recently. Marvin liked to pick on Lucy and was convinced she was a thief. It turned out the people had given her permission to borrow the things she did. Marvin then learned about her grandmother and felt awful about all he had done to her. He apologized and they were friends again.

This book has some great lessons in it, but I would be careful with the fact that her grandmother died. As well as the fact that she used violence (she scratched Marvin) to take out her anger. No one addressed that fact that scratching was wrong.

I recommend this book.
Posted by Morgan at 11:02 AM No comments: